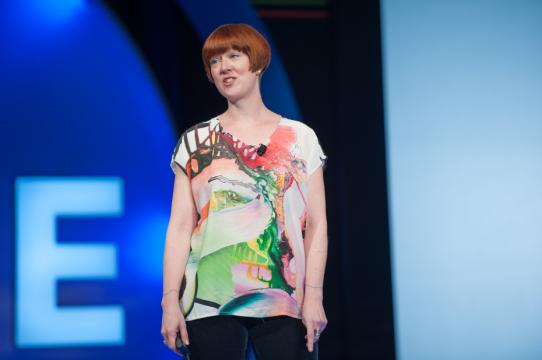 We are pleased to announce that Robin Hunicke has joined the UC Santa Cruz faculty as an associate professor, to direct the new BA in Art & Design: Games & Playable Media.

"Robin Hunicke is fabulous,” said Jennifer Parker, Chair of the UC Santa Cruz Art Department. “She is a huge supporter of independent game development and an advocate of women and minorities within the games industry.”

“Her vision to expand the arts to include games will enable a focus on experience design that partners well with the current Games and Playable Media program on campus,” Parker added, “while also establishing a new place for Games as Art--bringing together original and unique ways of knowing and experiencing the world through engaged play.”

Hunicke was recruited to join Electronic Arts in 2005, where she worked on The Sims2, MySims, and Steven Spielberg’s Boom Blox series for the Wii. In 2009, she joined the independent game studio, thatgamecompany, as executive producer for the award-winning Playstation Network title Journey.

"I have admired Robin's work for many years, so having her join the faculty is a dream come true,” said Jim Whitehead, UC Santa Cruz Professor of Computational Media. “Her blend of deep design and technical background is extremely rare, and I'm excited she will be bringing this knowledge to our students."

A game designer, producer and CEO in her professional life, Robin has a rich, interdisciplinary background in Art, Computer Science and Game Studies. Here, Robin talks about her mission in joining the university, explaining her passion for creating games with a focus on engaging new, diverse voices in this influential and exciting interactive medium of expression.

“I have always been drawn to supporting the next generation of developers, lending my expertise to educational and nonprofit efforts that uplift our industry, broaden participation and encourage innovation. From mentoring GDC scholars and aspiring young developers, to teaching and lecturing on MDA, diversity and game design – all my efforts are focused on exploring the space of what games can be. So it’s really an honor to join the faculty and students at UC Santa Cruz, and their exceptional initiatives in this area.”

In addition to her work in game creation and education, Hunicke co-organizes the curated Experimental Gameplay Workshop, held annually at the Game Developers Conference, the largest annual gathering of professional video game developers. She has chaired the IndieCade Festival of Independent Games, and has published and lectured extensively on the Mechanics, Dynamics, Aesthetics model of game design, which will be a core component of the new program.